A member of the well known, ornamental Coleus, widely grown as a decorative garden plant for its attractive variegated red leaves. Cream bordered 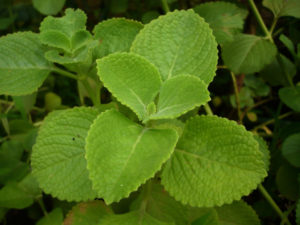 This plant is becoming popular and sought after. There have recently been several enquiries about it. There are two varieties now available in Christchurch, one has plain green leaves, the other is exactly the same but has leaves with an attractive cream border.

Being tender, it will not grow outside here and even in Summer does better indoors where it makes an aromatic year-round pot plant. I brought it down from North Auckland many years ago and have it still. It is easy to propagate by putting a cutting into water where it roots quickly.

If a rooted cutting is neglected in a large pot indoors, it will grow into a sprawling untidy herb plant about 50cm high with a few spikes of small two-lipped mauve/pink flowers. I have seldom seen any flowers. The thick, brittle, hairy leaves and stems, even if merely brushed past with a finger, give off a sweet, strong, lasting pleasing aroma. It likes regular watering but can be dry and happy. Grows well even in poor soil. Best kept in a pot to keep it tidy. It does not spread. Like all the Lamiaceae family, the stems are four sided.

Other names you may hear: Queen of Herbs, Five in One Herb, Mother of Herb, All Seasons Herb, Country Borage, Indian Borage, Five Spice Herb, Chinese Three in One, Broad Leafed Thyme.

Uses: The leaves are used to add flavour to meat and bean dishes in Caribbean cuisine. The flavour is described as being a combination of thyme and oregano. In Taiwan, the plant is used in traditional medicine to treat inflammation or swelling. In Indonesia, Philippines and India, the plant is used as a treatment for coughing. After giving birth Indonesian women sometimes drink soups made with the leaves to promote lactation. The essential oils are toxic to some insects.