The 2016 Shirley-Papanui Edible Garden Awards function attracted 65 guests, 48 of which were nominees, and friends and families of the nominees. The remainder were elected members, CHS judges (Michael Coulter and Neiel Drain) and presenters, members of the CHS and Council staff. A student photographer and tutor from Papanui High school also attended. 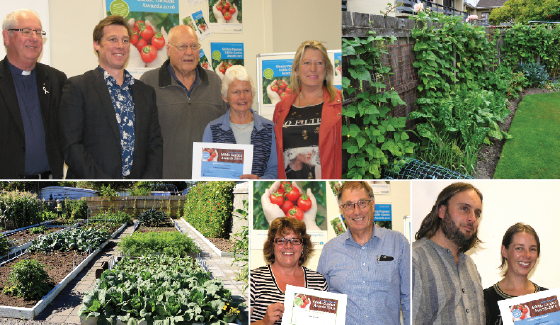 CHS President Alan Jolliffe shared the presentation duties with Shirley-Papanui Community Board Chairman Mike Davidson. Both commented on how such awards strengthened community bonds. “It’s all about sharing, having fun and producing great and nutritious food from your garden, however big or small it may be” observed Alan.

“We are not judging the gardens on their prettiness but their productivity” said CHS judge Neiel Drain. Michael Coulter observed that there were many repeat entrants, “and it’s been good to see the considerable progress many have made since we first saw them in 2013 or 2014”.