The CHS is looking for someone to drive this worthwhile project for Beth. The project requires a one-off contribution initially, then ongoing funding for diesel fuel to pump water from a nearby river to the garden.

This is an opportunity for members to make a valid contribution in helping orphans in an impoverished country. The Board is supportive of this project and welcomes the opportunity to discuss it further.

This is Beth Goodwin writing, one of the younger members of Canterbury Horticultural Society. You may remember last year I spoke at the Good Gardeners Society, as well as the Fruit and Vegetable Circle, and one of the All About Gardening evenings. I spoke about my 2016 travel experiences on seed-saving farms in India and Thailand, working with rural villages all over Asia to teach composting etc, visiting the Monsanto Tribunal in the Netherlands, and visiting greenhouse agriculture in Israel.

This year you won’t have seen me around much, as I’ve moved on to a new adventure, helping to set up a large garden for an orphanage in Zimbabwe, which is the country in which I grew up. I will tell you a bit about it below, and I’m writing in case it’s possible to ask CHS members if they would be interested in supporting the garden project financially. I don’t make a habit of requesting funding, and I apologise if it’s not appropriate, but I hope you’ll agree this is a special case. 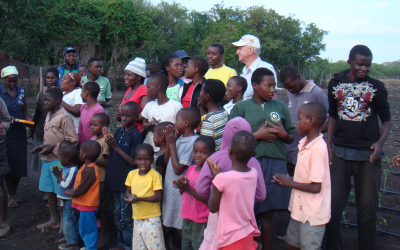 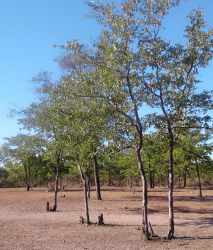 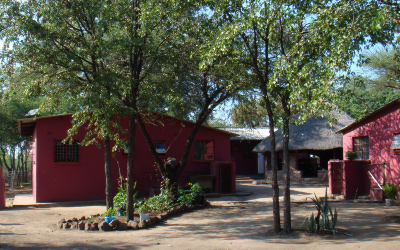 The orphanage where I am is in the southern part of the country, which is particularly hot and dry, it’s swiftly heading towards becoming a desert. Erosion and land management are a huge issue, especially since Robert Mugabe’s resettlement (land-grab) scheme from the year 2000 onwards. There’s a huge amount of superstition and witchcraft operating in this area also, which means that if a child is orphaned (which happens often because of the high incidence of HIV/AIDS), the belief is that the child is cursed, so relatives and friends aren’t keen to take on the child. A lovely Afrikaans couple, from South Africa, Christo & Ezelle Schimper, have been living here for 30+ years, and they set up the orphanage here. The name is Lirhanzo Children’s Village. Lirhanzo means ‘’love’’ in Shangaan, the local dialect. The children’s home is great – it’s spick and span, and there’s a lot of laughter and good teamwork happening. It’s incredible to see previously abandoned children now blossoming in such a loving environment, and they also have the incredible opportunity of going to school, and later, university.

The location is very remote, in the bush/wop-wops, a couple of hours’ rough road from any main town. There are plenty of snakes, spiders and scorpions, as well as magnificent tropical birds and beetles. The diet consists of maize-meal, and meat or beans, almost no fresh fruit and vegetables, because you just can’t get them around here. There is a river, but it’s too hard to get water to drink as well as to water a garden. The climate is dry from January to November. Goats, cattle and chickens roam freely. So unless you have money for a fence, and irrigation, a garden is impossible. An agricultural worker earns between $36 and $75 USD per MONTH!! He/she might be a single parent of many kids, and that salary has to cover school fees, and food and everything. It’s enough for maize-meal, salt, oil, soap, and that’s about it. So there’s no option of doing anything which requires capital, without the help of overseas funding. 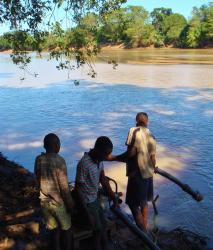 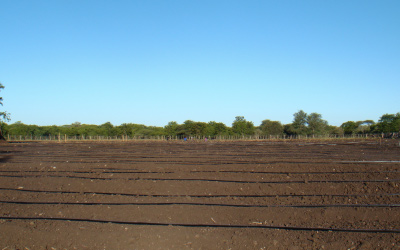 That’s setting up the background of how dire life is in this area. So the children’s home is SUCH a blessing to so many. Many of the children who would not have had opportunity even to finish primary school, have now gone on to university. The children’s home recently managed to get funding from overseas for a fence, so they fenced off 4 Acres to include bulk crops such as maize, as well as fruit trees and a variety of vegetables. The funding was given also for irrigation. This was just being set up when I arrived a few weeks ago. Irrigation is working beautifully, and it’s incredible to be able to water vegetables in this dry season (we don’t expect any rain before late November). We’ve planted out about an acre of vegetables, and they’ve grown faster than I believed possible. It’s currently hotter than this last summer in Christchurch, and as you know we’re well into Autumn. The temperatures will continue in the late 20s and 30s throughout Winter, dropping no lower than 6 degrees at night. So it’s ideal summery growing conditions for delicious things like Citrus, Mangoes, Tomatoes, Pumpkins and many many more….! There are even 4 shade houses which keep it a fraction cooler, so we’ve put a lot of happy lettuce in there.

This is all well and good, and such a blessing, but we’ve now struck a problem. The water that we are using is the same water used by the community here. It has to be pumped into tanks from the river which is about 3km away. The pump is a rickety diesel pump, held together with goodwill and strips of cloth/rubber and it can’t pump more than 3 hours a day. Once again, the fact that they have water to drink (even though it’s surface water filled with silt and fish and who knows what diseases) is a blessing due to overseas funders. They pay $100 USD per month for diesel to pump the water from the river to the tanks.

Now that we have added 3 massive tanks for the drip irrigation, the consumption of diesel has increased a lot, and diesel has also gone up in price. We have so far only planted out 1 acre, but we’ve stopped there because we suspect that if we plant out the remaining fenced 3 acres, consumption will be more like $400 USD per month. This is for drinking and general use water for the school during term time (200 students), and orphanage (around 50 people), and the 4 acre garden.

Since we don’t have the additional $300 USD (approx.) per month, we can’t plant out any of the rest of the field. Nor do we have funds to buy fruit trees. It’s a crying shame, because the more that we plant, the more nutrition they can eat, but also there would also be plenty of surplus in time that they could sell to fund the diesel in future. So, in time, it might even pay for itself, if managed well.

The soil is divine, dark loamy clay, the fence is there, the irrigation is ready. You can see why I’m frustrated and why I thought it might be worthwhile to write. I’m hoping that, if you feel it’s appropriate, you might be able to make a brief announcement at the next AAG or something, or in a newsletter/email and if there’s anyone who feels they might like to contribute, I would pass them on to Ezelle Schimper, the founder and coordinator of the children’s home.

We’re looking for funds for either/both:

–          A one off amount to help with start-up costs of the garden, such as the purchase of seeds and fruit trees (and a wheelbarrow that actually has a wheel would be nice!)

–          Ongoing regular amount to support the diesel costs per month, so that we can pump enough water to plant out the whole garden.

One day we’d like to look into getting a more reliable pump at the river which would pump from below the sand as a safer water option, and which works on solar power (because there’s plenty of sunshine!! It takes about half an hour to dry my washing). But this would be a phenomenal cost, and so we’re not looking at that for now.

I hope I might be back in Christchurch one day, though I have no idea of my future plans at this stage. The Autumn leaves would be looking gorgeous around now, I’d imagine?