Chiang Mai – the Rose of the North (full)

The hills and valleys of Chiang Mai are ideal natural habitats for a vast variety of tropical as well as temperate flowers. Most bloom early in the year from January to February. This is the best time to enjoy the spectacular floral tapestry that blankets the land with colourful flowers such as the African marigold, globe amaranth, orchids, chrysanthemum, celosia, and assorted roses such as the ‘Fa Mui’ and thin ‘Uang Dok Lek’.

Chiang Mai takes great pride in having maintained its tradition of hosting the Festival for the past 38 years. The ancient Lanna Thai kingdom — ‘land of a million rice fields’ — was also famous for its tradition of artistic excellence. The northern province of Chiang Mai has since been known as the ‘home’ of the legendary Lanna Thai artisans. Long recognized for their exquisite craftsmanship, the northern region is also noted for its elaborate traditional floral art installations. The festival features an impressive showcase of traditional and contemporary floral art and Lanna cultural splendour.

The festival also supports the province’s horticultural industry which has steadily grown in importance as one of Thailand’s major exporters of fresh cut flowers, ornamental plants and a range of other horticultural products. A total of 222 varieties of flowering and ornamental plants will be on display during the three-day event.

Be part of our inaugural tour to Thailand!  This fabulous trip takes in Hellfire Pass and the iconic River Kwai before heading to Northern Thailand where we visit the beautiful Mae Fah Luang gardens and the Golden Triangle. Once in Chiang Mai we shop, ride elephants, take in a cooking school or relaxing Thai massage and enjoy prime reserved seating for the Chiang Mai Flower Festival. Fully escorted, packed with inclusions and excellent value for money. 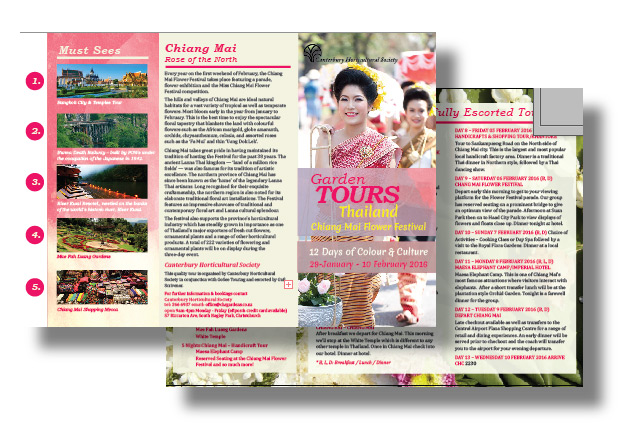 DAY 1 – THURSDAY 28 JANUARY 2016
CHC – BKK
On arrival in Bangkok you will be met by our local tour guide and transferred to your hotel.

DAY 5 – MONDAY 1 FEBRUARY 2016 (B, L, D)
HELLFIRE PASS/TIGER TEMPLE
Hell Fire Pass Memorial followed by a visit to the world famous Bridge over the River Kwai before taking a trip by train on the historic Death Railway. Dinner at hotel.

DAY 6 – TUESDAY 2 FEBRUARY 2016 (B, D)
KANCHANABURI – BANGKOK – CHIANG RAI
Today we fly to Chiang Rai where you will be met by our local guide and transferred to our hotel. Dinner at hotel.

DAY 7 – WEDNESDAY 3 FEBRUARY 2016 (B, L, D)
DOI TUNG/MAE SAI/GOLDEN TRIANGLE
Northern Highlands to Doi Tung and the Mae Fah Luang Gardens. From here the coach continues to Mae Sai which is Thailand’s most northern border town. Board the bus again for the trip to the Golden Triangle – about an hour away. Dinner at hotel.

DAY 8 – THURSDAY 4 FEBRUARY 2016 (B, L, D)
CHIANG RAI – CHIANG MAI
After breakfast we depart for Chiang Mai. This morning we’ll stop at the White Temple which is different to any other temple in Thailand. Once in Chiang Mai check into our hotel. Dinner at hotel.

DAY 9 – FRIDAY 05 FEBRUARY 2016 (B, L, D)
HANDICRAFTS & SHOPPING TOUR/KHANTOKE
Tour to Sankampaeng Road on the North side of Chiang Mai city. This is the largest and most popular local handicraft factory area. Dinner is a traditional Thai dinner in Northern style, followed by a Thai dancing show.

DAY 10 – SATURDAY 06 FEBRUARY 2016 (B, D)
CHANG MAI FLOWER FESTIVAL
Depart early this morning to get to your viewing platform for the Flower Festival parade. Our group has reserved seating on a prominent bridge to give an optimum view of the parade. Afternoon at Suan Park then on to Haad City Park to view displays of flowers and floats close up. Dinner tonight at hotel.

DAY 11 – SUNDAY 7 FEBRUARY 2016 (B, D)
Choice of Activities – Cooking Class or Day Spa followed by a visit to the Royal Flora Gardens. Dinner at a local restaurant.

DAY 12 – MONDAY 8 FEBRUARY 2016 (B, L, D)
MAESA ELEPHANT CAMP/IMPERIAL HOTEL
Maesa Elephant Camp. This is one of Chiang Mai’s most famous attractions where visitors interact with elephants. After a short transfer lunch will be at the plantation style Orchid Garden. Tonight is a farewell dinner for the group.

DAY 13 – TUESDAY 9 FEBRUARY 2016 (B)
DEPART CHIANG MAI 
Late checkout available as well as transfers to the Central Airport Plaza Shopping Centre for a range of retail and dining experiences.