In January 2016 the CHS lead a tour group to Thailand. Part of the itinerary is a visit to the Thai –Burma Railway,- often referred to as the “Death Railway”, because of the number of prisoners of war and civilians that died during its construction, was started in October 1942 and completed one short year later. It covered some 419kms. 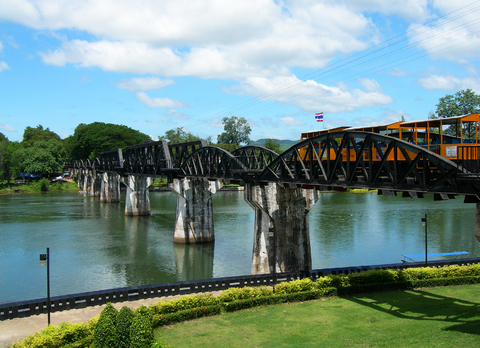 The infamous “Death Railway” was constructed by allied POWs, civilian prisoners and conscripts of the Japanese army to enable the Japanese to transport soldiers and supplies to support their armies in Burma and then on to India.

The railway was built under atrocious conditions and took little account of obstructive landforms or regard for the unforgiving landscape that lay on its route. Over 13,000 POWs and over 80,000 civilians died whilst constructing it.

One of the more poignant highlights of our trip to Thailand will be a visit to two sites on this railway, “Hellfire Pass” and “The Bridge on the River Kwai”.

Where the railway line came to a geographical obstruction the prisoners had to bridge it or cut through it. This was the case of the Konyu cutting, known to all as “Hellfire Pass”. In 1943 the prisoners were forced to cut a gully 75 metres long and 17 metres deep largely by hand for at least 12, but often up to 18 hours a day.

After the war, parts of the railway was demolished  and the line allowed to revert to the jungle but in 1980 the line was cleared and now “Hell Fire Pass” is maintained in remembrance of all those who died during its construction.

We also visit “The Bridge on the River Kwai”. Two bridges were built at this site by POWs, a wooden trestle bridge and a steel bridge which sits alongside.  Both bridges were finished in early 1943. Our visit to these sites will almost certainly be one of learning and remembrance.