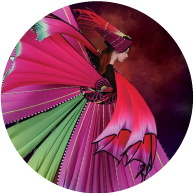 The spectacular and highly-theatrical WOW® performances, held in Wellington every Spring, started in Nelson in 1987 with a single evening show in a country cottage. That was the passionate dream of a local Nelson sculptor, Suzie Moncrieff, who encouraged her creative peers to create artworks to be worn on the human body. Every year since, the realisation of that dream comes from thousands of creative people, all over the world, designing wearable art to earn a role in an unforgettable, choreographed performance of dance and music, while vying for prestigious awards and more than $165,000 in prizes. Hundreds of entries arrive at WOW® in Nelson every Autumn, in time for the show selection process. Designers create their garments for categories ranging from wearable art for children, to breath-taking Avant Garde and Open Section garments; to garments aiming for recognition in Creative Excellence, Costume and Film, and the Bizarre Bra™.